Elephant in the Cookbook

Elephant in the Cookbook 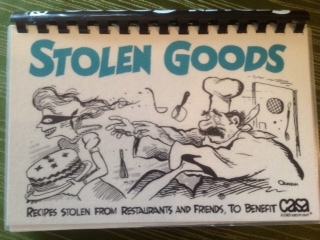 It is my philosophy that every day I try to solve just one (1) problem.  It could be a loose button, a burned out light bulb, coming up with an idea to solve world Hunger. Anything!
Today, I awoke and walked past the row of video DVD’s that I lined up in the hallway. I put them there recently, as I explained to my partner who had to carefully walk by without setting off a series of dominos DVDs, that boxed up videos were not being enjoyed. They had been there in the closet for over a year, and we needed a better solution so we could enjoy them better.
Looking around at spaces, I spotted one set of cabinets that we rarely used. Old baking cookbooks. Ah. Yes. Well, I didn’t have the time to bake these days, and especially now that we were Gluten-free I rarely used recipes for cookies, cakes, breads, and pies.  We were living a healthy diet. It was clear to me that I could take these out and see if my children wanted then, and if not bring them to Good Will.

Several of the cookbooks were made by organizations. One organization called CASA, which is an acronym for A Child’s Voice in Court, put a cookbook out called “Stolen Goods” Recipes Stolen from Restaurants and Friends, to Benefit CASA.   The book “Food for Thought: The Santa Cruz Family Cookbook” was written by Santa Cruz and nearby Families to honor the Gomes Family, the mom was diagnosed with breast cancer while pregnant and then brain cancer after just giving birth. My brother, Al Luckow, let me buy one, as he was designing and making the cookbook with his wife in their home at the time to help.
Then there was the half size cookbook with brown pages, held together with a piece of leather and the kind of clips that hold lots of pages in legal files. It was obviously prepared on a typewriter and contained recipes such as Mangoes Borrachos, Philippine Turon, Pancit Bihon, and King Crab San Miguel. This was the cookbook composed and assembled by military wives living with their husbands in the Republic of the Philippines, myself among them in 1976.  One memory comes to mind of the unusual meats cooked, including dog, monkey, and snake with side dishes of banana and mango.
Standing out in a bright lemon yellow, sturdy cover was a book simply titled “Recipes” compiled by the Ritzenthaler Special Education Department of Mundelein, Illinois,” with a happy note in green ink from my mom saying, “Hope you’ll find some of these recipes useful.” I smiled at this one, and flipped through the recipes seeing the usual Pumpkin Bars, Grandmother’s Oatmeal Cookies, Brandy Stew, Deep Dish Pizza, but then one recipe stopped me in my tracks!   Elephant Stew!

Even the cookbook in the Philippines didn’t have this recipe!  I read it, and wondered how I could have missed this when I used the cookbook?  When I think of elephants these days it is usually when a client comes to me and is dealing with a communication challenge. “No one pays attention to this problem. It’s the elephant in the living room, you know?”  Yes, I do know. It is one of the reasons that I exist, to help people who want to get beyond the fear that holds them back.  We teach processes and hold workshops at Apositiva, so everyone will have the right pathway to overcoming limiting beliefs and deal with communication in a positive way.
Yet, here I was with an “elephant in my cookbook.”  So many times when we are doing something, we are actually only half there. You know what I mean. Reading a book. Watching a game. Taking a walk. Listening to a person talk. Being with our significant other, spouse, or good friends.  The “I” is part there and who know where the rest of  “me” is? Probably out thinking about other things, places, problems, events.  Yet, an elephant seems a little hard to miss.
Smiling, I pulled out the cookbooks, saving these small special ones, as they held a very nice energy. People put them together for people.  Bookmarking the page on the Elephant Stew, I realized once again something that my good friend Dr. Marci Nemhauser had said to me, “It’s all good.” This means that there is a lesson in there someplace and no matter what a mess a challenge or problem can be, there is something good to be appreciated and learned.

The videos have a new home. Boy, oh boy will my daughter be surprised when I bring her a box of cookbooks! My Partner can once again walk fearlessly through the hall without regard to starting a cascading series of DVDs to trip him up!
I would like to share this amazing recipe. I’ve never made it, but if you ever have “an elephant in the room” that you want to use, it might come in handy.  If you want to enjoy a another good recipe for you, try an experiential workshop at Apositiva in Compassionate Listening, Creativity with Mindmapping, or Learn Self-Help Processes using tools like NLP, Imagework and Hypnosis.  Rich and Cat can answer your questions. Call us at Apositiva in Portland at 503-525-0595. See you soon.
Elephant Stew
(By K. Beese, Ritzenthaler Special Education Department cookbook)

Cut elephant into bite size pieces. This will take about 2 months. Add enough brown gravy to cover. Cook over Kerosene fire about 4 weeks at 465 degrees. This will serve about 3,800 people. If more are expected, the 2 rabbits may be added, but only do this if necessary, as most people don’t like to find “hare” in their stew.