Grimm Tales of a Big Bad Wolfe, a Knight, and a Cat

Grimm Tales of a Big Bad Wolfe, a Knight, and a Cat 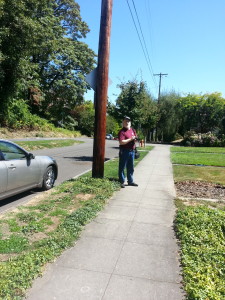 Hello, Kids.  Rich Aanrich here and today, we have an adult Grimm Tale for you. Recently Cat and I were on one of our daily walks for health and to enjoy the great environment we live in. The sun was shining, and it was just beautiful outside! What a wonderful time to just enjoy our neighborhood.
Audio of Following: Grimm Tales of a Big Bad Wolfe, a Knight, and a Cat Text to Speech
Grimm, the TV series, uses one of our neighbor’s houses to film one of their main characters. It’s been fun seeing all the activity and actors running around when it happened. There hasn’t been any filming for almost a year now, and even though it is someone’s private home, it’s still an attraction.
Scene one.
Enters the Fairy Tale’s Big Bad Wolf! As we’re walking by our neighbor’s  house, we notice a car pulled up and someone was out on the sidewalk with a camera. Now this is fine … except, he was telling a woman that the house wasn’t lived in and it was okay to walk up on the porch for pictures; which she did and then began peering through the windows into the home. We knew our neighbor wouldn’t want that, so scene two.
Scene two.
Enters the Thoughtfully-Impulsive Knight in his grey sneakers, followed by his sweaty partner (Cat was jogging). “Hey! What are you doing?”
Rich and Cat jog noisily down the hill, telling the tourist on the porch it isn’t okay to peer into our neighbor’s house. Meanwhile, never leaving the sidewalk the Big Bad Wolf, wearing a souvenir NBC shirt and cap, is prancing around yelling it isn’t occupied, and snorting and threatening to have us sued, etc. We point out the Neighborhood Watch sign right in front of the house, and tell him it is not okay to go up to our neighbor’s home and look in their windows. The Oklahoma tourist on the porch begins to realize we’re serious about protecting our neighbor’s property, apologizes, and gets back in the car.
Scene three.
The huffing and puffing big NBC imposter with the full beard drives down the street.  Meanwhile, our other neighbor had come out on his porch, smiling, and explained how this man had been warned with a letter from the NBC Grimm contact that photos could only be taken from the sidewalk, and to respect the privacy of this homeowner. We felt good standing up for our neighbor when they were not home. A few minutes passed, and we still stood having a friendly chat with the other neighbor, and guess who comes back again?  You guessed it! He drives by again, and finds Cat and I, and other neighbors still talking. He looks angry. We look happy. He finally drives away. Heroes!!!
Closing scene.
It ends up that the Big Bad Wolf really is just that. He is a disbarred attorney who has been served with a restraining order for repeatedly bringing people and props onto the property. Which explains why he never left the public sidewalk, but encouraged the tourist. He even wears a shirt with an NBC logo to convince the gullible that he’s legit, when in fact he lies and is a fraud. You decide, is it okay to send people onto someone’s private property, when you know better? Is it okay to stand up for your neighbor?
Epilogue.
Cat and I continued our walk, with a fair amount of adrenaline pumping and our neighborhood felt even more beautiful, knowing we are part of a safer community!  When something was “off” in our neighborhood we took a stand.  How many of you have the courage to stand up when you notice a “misstep”?
We’d love to make a stand with you! We’ll work together using proven processes.  Coaching, Hypnotherapy and NLP (Neuro-Linguistic Programming) can be amazing tools to empower the Thoughtfully-Impulsive-Knight (or cat) in you. Let us show you how. 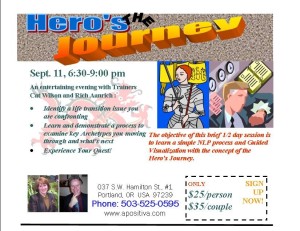