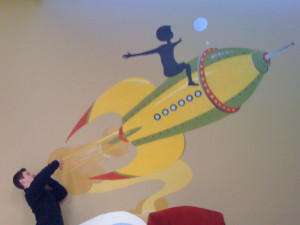 Just a Spoonful of Imagination by Rick Wilson

Just a Spoonful of Imagination

A new movie was released over Christmas, called “Saving Mr. Banks” where the story is revealed about how “Mary Poppins” was created by Walt Disney. It is sweet and mesmerizing, as we discover how something as simple as a story can take us on such a mind set … a journey.  When the writers and music writers are putting together, “Just a spoonful of Sugar,” you get a sense that this was work. Yet, the movie gave us a feeling that a woman just peeled the music from the air and played it for children to help them take their morning “medicine.”  Typically there is another story behind the story. Mix your story with a spoonful of imagination and you have a musical!

Just a Spoonful of Worth

Your life is a story. You create it bit by bit, sometimes bite by bite. When you put the words together, what are you creating?  Remember that every story begins with a word. The word leads to a sentence. The sentence leads to a paragraph The paragraph leads to a story book. Begin now with “Just a spoonful” of this or that and create a life you want to live.  You are so much more than you know!

Offer of Just a Spoonful of Coaching