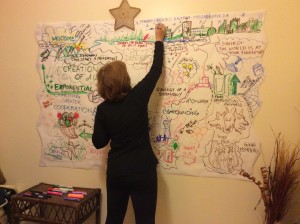 syn er gy –  Greek [sun – together] + [ergon – work] = [sunergos – working together]
What is Synergism?  I went to the dictionary.  One dictionary didn’t have the word, although the first known use of the Latin “synergia” was in 1660, and the Greeks used “synergos” meaning “working together.”  After searching several dictionaries and Thesaurus references, my partner went online where several really great definitions were listed.  Surprising how many meanings there are for one word!
Definitions in dictionaries may bring us part of the way to understanding, but to really get a sense of what synergism means, it helps to bring real people together. Here are some of those ideas I drew on the wall from a gathering of doctors, teachers, video producers, and coaches.
Synergy starts with a “welcome” feeling, because that attitude or state opens the mental space for synergism to occur. Synergy is a creation of a whole from varied parts that makes something bigger than any individual part by itself.  This thought opened up the idea that one person can start a movement such as Occupy Wall street, Woolworth Counter, Rosa Parks, and an Avalanche yodel.

Synergy can take in any number of things. For example, a bunch of musical instruments by themselves can only play a limited number of sounds. Yet, when combined can create a band or a symphony!  Telephones connect people. Now they also take photos, play games, keep lists, buy services or items, pay bills, act as alarm clocks, inform through computer connected zines and social networks and more!
In the case of animals, it can be the difference between a lone wolf spotting something or a wolf pack helping the entire pack to survive. This applies to gangs of Meer Kats as well, keeping all acting as a larger, safer unit. 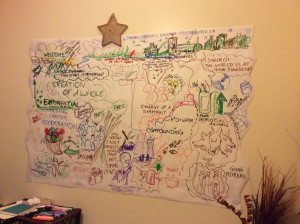 Synergy can bring together or split apart, such as in an atom bomb. Chemical reactions can be synergistic where water comes together from hydrogen and oxygen. Water can be boiled, making steam, which can move steam engines. Ingredients come together in recipes, such as salt and sugar, and can change the experience of a lime. Synergy is a cornucopia.
It can be as effective as one person talking on a telephone talking to another. Or one Internet talking on a phone line to the World Wide Web. One person shared that according to Moore’s Law, technology doubles every 18 months!  So, there are obviously different levels of synergy from one individual connecting to another to a system connecting to entire systems.
Synergy can be teamwork, like honeybees coming together in a hive and making honey and sustaining life … or making honey to sweeten your tea as you share it with your friend. In football, a synergistic attitude such as displayed by football hero Marcus Mariota (University of Oregon player) affected an entire team, and created an incredible experience for the team, fans, and a world of onlookers!
The synergistic belief of Native American Indians preserved the planet with their connection with the earth, communication in tribes, and the saying, “One arrow is easily broken, but many form a strong bond.”
Imagine scribbling on the wall with a symphony of voices feeding you.  I was an instrument of sharing!  Listening to people bubbling with ideas on synergy was amazing!  I captured these concepts on the papered wall with colors as fast as I could, translating words into pictures. After an hour, the room of activated thought still flowed with more and more creative ideas on synergism!  Paper on the wall was full. Energy in the room was electrified with a state of open aliveness!

Now, you are here in this synergism, reading this article, and possibly sharing it. What would happen if we all focused on this state of open aliveness? Where would you go with such potential? Who could you be when you combine together with others exponentially into something greater? Why not find out and create a synergism?
Synergy creates energy and possibilities.  When we pool together, we can pull together. Let’s all bring our parts together and create synergism. 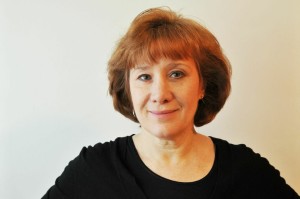 Given the energy, health, and ideas we can do a lot to make our community a better place.
Synergistic change can begin one person at a time in personal coaching, team-building workshops, or something else.  Did you like looking at the Graphic Facilitation (also known as Visual Facilitation)?  It combines mindmapping and brainstorming and brings people together to share views, perceptions, and create something more. We offer classes here!
In any event, it takes someone to begin by making a call to action. Let’s work together. Call us at 503-525-0595.