Held Back by Nothing More Than a Thought 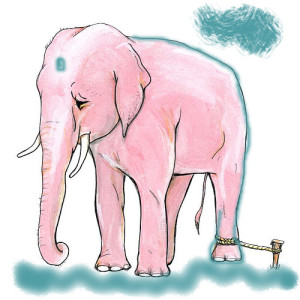 Held Back by Nothing More Than a Thought

Are you familiar with what happens to elephants and horses? They become conditioned that they can’t go somewhere. They stop with even a piece of string. Hi, this is Rich Aanrich with a “new thought.”
In the case of horses, farmers put wires with small electric currents around an area. When the horses go up to the fence and get zapped a few times, all the farmer has to do is change the wires to string and the horses will remain inside, held in by only a piece of string.
Elephants, as you probably know… when they are young … are held by a bracelet around one of their legs with a large piece of chain. It’s anchored to the ground, and holds tight. The young elephant becomes so conditioned that when the chain and anchor is replaced by a small piece of rope (a bigger piece of string) that as soon as they move and feel the slightest resistance … they stop … and stay! It’s held in by only a thought that they cannot move forward … and they remain conditioned.
It might be useful for us in our own lives to take a moment and notice, “How and where have we been conditioned? Where do we not allow ourselves to move forward?”
There is a term for this: “Thought Virus.” This errant thought, i.e. thought virus, has become so predominant over time that like the horse and the elephant we feel the slightest resistance whether it’s an emotion or thought. Rather than thinking it through and challenging it through we just stop. That is one of the ways that biases and prejudices get ingrained into a person or a culture.
Thought viruses can come from any number of places whether intended or unintended which can stop you. It can come from a parent’s comment, a friend, coaches, teachers, ministers, priests, rabbis, gurus, or almost anywhere or anyone that we don’t stop and challenge something that has been said to us. How we react or do not react can define our lives.
An example for myself is that I had a couple coaches in high school that had their pet players.  When I believed I could be better in a couple positions or be used on the team in a better way, the coaches flatly said, “No. You have your position and that’s all you get to do.”

Never Again Held Back by Nothing More Than a Thought

Upon graduating, in a moment of decision, as I thought about the treatment of the coaches I said to myself, “Never again!” Never again would a coach tell me what I could or couldn’t do and the underlying motivation directed a lot of the self-reliance I’ve had in my life.
Another time after first moving to Oregon I was thinking about writing a book, as many of us do. So, I attended a meeting put on by publishers for aspiring writers. One o f the main points of emphasis by a publisher was that there were about 300,000 books coming out every year, and that in all honesty the publishing industry probably didn’t need any new writers. Your chances of getting on a bookshelf were miniscule. Slim to none.  Having heard that I put my writing on the shelf and didn’t finish a book for another 20 years.  I chose to do it several years ago, but in retrospect I wish I had challenged what that publisher said. My eBook “Twisted Destiny” is available on Amazon and through BNN (Barnes and Noble).
So, I wonder for you … what is it that some person (well meaning or otherwise) has said that has stopped you in your tracks … and you haven’t allowed yourself to move forward, yet?  What is that “thought virus,” that statement or look that you need to say, “No more! It’s time for me to move forward! Where do I want to do that?”

Come over and see us at Apositiva where we can help you unravel your dream.
We’ll work together so we can help to remove the thought virus and replace it with something useful and motivating. Call us at 503-525-0595.