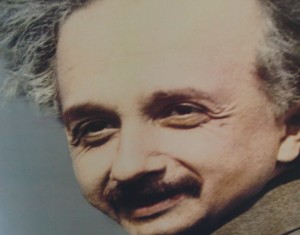 What question will you ask the world today? How do you learn and grow and become? Let’s explore how Albert Einstein became a genius.
Albert Einstein (1879-1955) drove a vehicle for curiosity, discovery and creativity… a mind.  A man of science, math, music and philosophy he loved learning and opened up to the world a vast base of discovery for us to play. How did he learn and from what did he draw his base of ideas?
Einstein observed, discovered, explored with his own senses the world around him. Seeing, listening, touching, wondering. He ventured with great excitement and passion, driven by a deep and intense interest of life and the universe: how does that work? what makes that happen? and what if?  His parents put their young son in the best places they could find for learning, and they often invited dinner guests, such as Mr. Talmud, a medical student, home for dinner. Talmud inspired the Einstein’s son (and was inspired by him), sharing books in geometry, philosophy, and introducing him to science. The science book was “People’s Book of Natural Science” by Aaron Bernstein. One day a compass was introduced and Einstein was greatly inspired! Imagine that! Something that moves without internal gears and wheels! What else is out there? Think back on your youth… you may remember someone who inspired you at a young age. How did they make it interesting to you back then?
Albert liked learning, but not the way many of his German instructors taught. He had a skepticism and resistance to receive wisdom, and this became a hallmark of his life. (He would not have made a good little soldier.) In the German schools of learning Einstein perceived teaching to be “Zwang” … German for “to be in constraint, compulsion, obligation and co-ercion.” He had his own way of taking information in and questioned everything.  Einstein found that great ideas come from sitting with it, opening up to it, listening to all the views of it, wondering with a beginner’s mind! Like the mind of children, he had an insatiable desire to “play” with an idea. Yet education tends to be delivered in a rushed style, not allowing for play. Have you been stopped in your learning by ‘zwang’?
Einstein stated, “Blind respect for authority is the greatest enemy of truth.” This statement did not win kudo’s, prizes, and accalades with his instructors and peers.  Yet, even they knew he had the markings of a genius! As you know, Einstein developed a base of knowledge now taught in most universities.We quote him and revere his advanced ideas for the time!
By the way, history doesn’t always get the story right. “Ripley’s Believe it or Not” got it completely wrong when it said Einstein failed math. He was exceptionally good at math, and even his math professor tried to get this rumor corrected. Yet, once something gets lodged in as truth, it is hard to get it corrected even if it is inaccurate. It is true Einstein was obstinate, and perhaps it was seen as not being a cooperative student (prized by authority). This is why we must stop and reflect on what ideas head towards our head. Before we let them in, whether it is an opinion, someone’s stated fact, or a rumor we are wiser to stop and reflect on the information. Where did that “fact” come from? What was the intention of the study that produced it? How will it move other people and me to perform and what will I then become?
Albert Einstein knew how he learned best, but he believed in and worked best by taking the external world in through his senses, and then bringing it internally in for consideration.  He died in 1955, which means he wasn’t affected by the internet. What would such a learner do had he lived to be a part of this information age? Do you think he would have relied upon everything he read based on his perception of learning?
As you celebrate this week of Independence Day, celebrate you, too. Celebrate your own learning, growing, and becoming as you become the real you. If you want to learn more about CREATIVE learning, growing, becoming, join our Mindmapping class opening for registration in August 5th and 6th. We’ll be exploring ways to play with mindmapping, mandalas, and creative visualization. Starts Friday at 4pm – 8pm and continues on Saturday from 10am to 5pm. Paper pads, coloring tools and book included. Refreshments and snacks provided. Special: $95 for 2-day class. Register by e-mailing Cat or Rich or calling/texting 503.816.5104.